Tiera is a character in the Kaijudo: Rise of the Duel Masters series.

Master Tiera was the Fire Civilization Duel Master back when The Choten, Nigel Brightmore, and Ken Takahashi were still part of the order.

When Saguru receives another piece of his memory from The Choten, Master Tiera is seen jumping off a cliff when her partner, Meteor Dragon, turned against her. Tiera was presumed dead.

Master Tiera turned out to be alive. She attempted to control the Fire Mystic (who dwelled on Black-Ridge Volcano), and in response the Mystic put a cursed mana-dampening armor on her, so she may never control a creature again. While a prisoner of Skycrusher, Master Tiera had taken Alakshmi Verma in as her apprentice and had her duel on her behalf. When Raiden learned about her fate from the Fire Mystic, he had no knowledge of Master Tiera's true identity at the time. When Alakshmi and Master Tiera were recaptured by Skycrusher's forces following the fight at Black-Ridge Volcano, Skycrusher claims that they might be of use to him. In the following episode, Skycrusher makes Alakshmi his personal summoner, summoning creatures at his request, mostly for the war effort.

In Unmasked, Master Tiera joins Alakshmi Verma when she stole a Choten Minion's transport and brings her to the Choten's ship as one of her attempts to free Master Tiera from her mana-dampening armor. When this was a success, Master Tiera stops Alakshmi from taking her revenge. It was revealed that Meteor Dragon "betrayed" Master Tiera when she was unable to control its evolved form and she was thought dead when she actually summoned a Blaze Belcher to save her. Before the Fire Mystic placed a mana-dampening armor on Master Tiera, she had remained in the Fire Civilization for 20 years, where she repaired her damaged gauntlet. Following Alakshmi being taken out of the Choten's base by Master Isao, Ray, Gabe, and Allie, Master Tiera stays by the Choten's side. This may be the reason the Choten is plotting to take over the world. Since she is grateful to Alakshmi for helping her out of her armor, she implores the Choten not to hunt her, but unbeknownst to her is that he had no intention in keeping his promise.

In The Evolution Will Not Be Televised, Tiera confronts Nigel when he attempts to destroy the lay line chamber in the Kaijudo temple to sabotage the Choten's plans. She engages him and Ra-Vu with her Meteor Dragon, only for the conflict to cause them both to fall into the lay lines. Subsequently, Tiera reunited with the Choten in the Quest for the Gauntlet storyline, where she summoned Moorna to serve as her creature partner in the battle for the First Gauntlet. They attacked Ray and Tatsurion during this engagement but were then confronted by Alakshmi and Ember-Eye and defeated; what became of them afterwards is unknown. 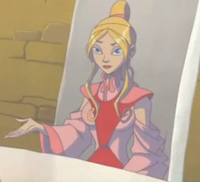 Tiera as a Duel Master
Characters in the Kaijudo: Rise of the Duel Masters Series
Main Characters