The Spell of Temporary Evolution is a spell in the Kaijudo: Clash of the Duel Masters TV Series. 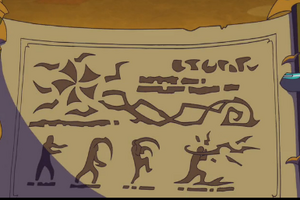 The spell allows the user to temporarily evolve their creature. To cast it, one must shout "<Name of creature>, evolve!" However, the spell does not work on creatures that are already fully evolved, such as Tatsurion the Unchained, Ra-Vu, Seeker of Lightning, or Bronze-Arm Sabertooth. The spell itself appears to last until the affected creature is banished or the spell is recast.

In the TV Series

In Boosted, Ray and Allie found the spell's scroll inside a golden chest. Ray tries it on Tatsurion the Unchained, but it does not work as he is already fully evolved. Allie tries it on Scaradorable of Gloom Hollow and she goes rogue before the spell wears off. Gabe evolves Reef Prince Glu-urrgle while repairing {{c|Panopter]] and he causes trouble for Toji and the Masters before getting his act together and repairs Panopter with Water Civilization tech, turning Panopter into a Light/Water creature.

During a subsequent fight between Ray, Allie, and Nigel Brightmore, several creatures are evolved, including Fluorogill Manta, Rodi Gale, Night Guardian, and Rumbling Terrasaur. Nigel comments that he thought he hid the scroll in a safe place where it would never be found.

In Extracurricular Activities, Master Chavez evolves Gilaflame the Assaulter during a fight with Fingers and Heller.

In The San Campion Hexagon, Gabe temporarily evolved Buoyant Blowfish during a fight with several of The Choten's minions, and it is believed that Vikorakas was also evolved.

In Forest for the Trees, Gabe evolved Blinder Beetle in an effort to stop the Tygrif and the Bladefish from stealing the Terrasaur horns for The Choten.

In Unmasked, Gabe evolved Blinder Beetle again during a raid on The Choten's ship. Later, during a flashback, Nigel Brightmore used the spell to evolve Meteor Dragon, which lead to Master Tiera's "death".

In Siege, Master Chavez used the spell on Gilaflame the Assaulter to combat Master Tiera and Meteor Dragon. Later, Gabe used it on Gargle to attempt to defuse the Evo-Serum Bomb.

Evolved Scaradorable having copied Rodi Gale, Night Guardian with Allie jumping onto her.

Evolved Rumbling Terrasaur with Ray and Allie riding it.

Evolved Meteor Dragon.
Add a photo to this gallery
Retrieved from "https://kaijudo.fandom.com/wiki/Spell_of_Temporary_Evolution?oldid=54951"
Community content is available under CC-BY-SA unless otherwise noted.