The Spell of Liquid Compulsion is a spell in the Kaijudo: Clash of the Duel Masters TV Series. It is the Water Civilization "Spell of Absolute." 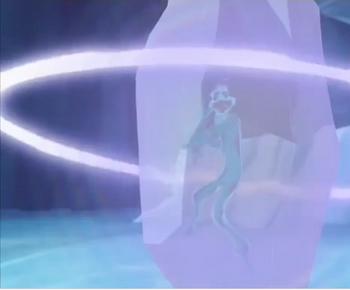 To cast the spell, one must perform the kata and recite aloud, "Flow of infinite waters, compel obedience!". This spell generates a stream of water that allows the user to control any creature the water targets, even to wrest control of a creature from another Duelist.

In the TV Series

In Bargain, The Choten used the spell to take control of "Humonguru" after tricking Raiden into giving him the spell.

In The Evolution Will Not Be Televised, the Water Mystic enters Gabriel Wallace's body so that he can cast the spell in order for the Spell of Radiant Purification to be activated.

Spells of Absolutes in the TV Series

Retrieved from "https://kaijudo.fandom.com/wiki/Spell_of_Liquid_Compulsion?oldid=55441"
Community content is available under CC-BY-SA unless otherwise noted.