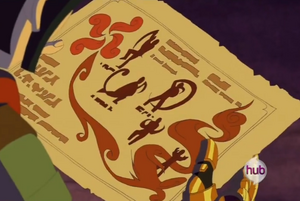 To cast the spell, one must perform the kata and recite aloud, "Four winds, bring absolute incineration!". This spell can unleash a powerful blast of fire, as an omnidirectional blast (with the caster and his allies shielded in the epicenter), or a concentrated stream, depending on the caster's intention.

This spell was first used in Quest in Fire after Ray obtained it from the Fire Mystic. Ray defied Master Tiera and refused to control the Fire Mystic and the Fire Mystic gave him the scroll that told him how to cast the spell. Outside of Black-Ridge Volcano, Allie, Gabe, Bob, Squeaky, Gargle and Alakshmi were being attacked by Skycrusher and his men. Luckily, Ray cast the spell before Skycrusher could get them and blew away Skycrusher, Burnclaw the Relentless, Blastforge Slavetrader, Flametropus, and some Drakon soldiers. However, Ray and his friends were nearly knocked into the lava below them before Bob saved them. Afterwards, Ray presented the scroll to Master Nadia as proof that the Mystics exist.

In The Evolution Will Not Be Televised, the Fire Mystic entered Alakshmi's body so that she could cast the spell to activate the Spell of Radiant Purification. However, due to the damage the spell caused in Quest in Fire, she momentarily hesitated, stating that the spell could kill Raiden.

Spells of Absolutes in the TV Series

Retrieved from "https://kaijudo.fandom.com/wiki/Spell_of_Absolute_Incineration?oldid=55437"
Community content is available under CC-BY-SA unless otherwise noted.