Silver Fist is a creature in the Kaijudo: Rise of the Duel Masters series.

Silver Fist resembles a humanoid Rhinoceros that wears an eye-patch on his right eye. As a Nature Civilization ambassador to the Fire Civilization, Silver Fist serves as the main source of communication between them. He also settles arguments between the two realms -- with force, if necessary.

In Into the Fire Pt. 2, Silver Fist was seen on the viewing platform with Lord Skycrusher along with Gregoria, Princess of Malevolence.

In The Nature of Things Pt. 1, a Silver Fist was seen partaking in the Nature Civilization Games at The Great Arena. 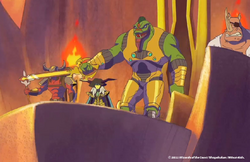 Behind Skycrusher
Add a photo to this gallery
Characters in the Kaijudo: Rise of the Duel Masters Series
Main Characters

Retrieved from "https://kaijudo.fandom.com/wiki/Silver_Fist_(Character)?oldid=56203"
Community content is available under CC-BY-SA unless otherwise noted.