Shattered Alliances is the sixth booster pack in the Trading Card Game.

It was released alongside the Solar Eclipse deck.

Clash of the Duel Masters introduced the first multi-civilization cards and they were a huge hit. Shattered Alliances follows up with the remaining five civilization combinations, enemies that are unlikely allies in a huge war that’s gripped the entire Creature Realm. These new combinations make building multi-civilization decks even easier for players and open up new strategies for Kaijudo. 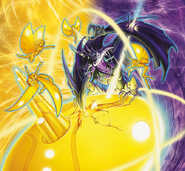 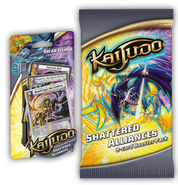 This is the first set to feature enemy multi-civilization cards; combinations of civilizations that are considered to be hostile, with both civilizations being enemies to each other.

This is the second set to feature the Creature Monarchs in card form, featuring Eternal Haven and Queen Kalima. This set introduces the following race(s) for the following civilization(s):