Sasha, Channeler of Light is a creature in the Kaijudo: Rise of the Duel Masters series.

Princess Sasha is one of the Angel Command, the highest ranking creature in the Light civilization. Mostly peaceful, she sends orders to Light creatures from her personal citadel while watching the ground below for any intruders, She prefers to give creatures a chance to leave, but if they refuse, she won't hold back. Between the creatures she controls and her megalaser cannon, most enemy creatures don't stand a chance.

She is summoned by Gabe in a last ditch effort to defeat Fingers' new creature, Impalicus. From what she has said, she does not know anything else other than order, but is curious about the human world. After defeating Impalicus in battle, she then tells Gabe she likes him and wants both of them to stay connected with each other, in which she touches Gabe's cell phone, creating a way for Gabe to contact her without a gauntlet. In a later episode, she uses this to return to the human side of the veil, in order to study them. As a Light Creature, she has the ability to manipulate light waves giving her the appearance of anyone, which she uses to conduct her study on humans.

Because Sasha lives in an orderly world, she understands very little about the powers of emotion, which leaves her vulnerable to them. In the episode The Unbearable Being of Lightness, Sasha was a victim to cyberbullying, which caused her to go on a destructive rampage, which she soon regretted. She has also become emotionally attracted to Gabe.

Quoted or referred on to cards 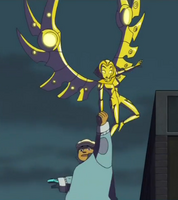