Rumbling Terrasaur is a creature in the Kaijudo: Rise of the Duel Masters series.

Rumbling Terrasaur is a tusker—one of the massive creatures that roam the plains and jungles of the Nature civilization. A Rumbling Terrasaur looks like a giant rhinoceros, except bigger, stronger, more heavily armored, and more dangerous thanks to its massive horn. A single Terrasaur is rarely considered a powerful threat, but those traveling in the Nature Realm are respectful of the Terrasaurs, since they are abundant and travel in packs!

Even before he knows about the art of Kaijudo, Raiden Pierce-Okamoto summons a Rumbling Terrasaur when threatened by bullies, although he was unable to control the creature he summoned. It was then defeated and captured by The Choten.

In Forest for the Trees, The Choten has Heller and Carny use the Bladefish to harvest the horns of the Rumbling Terrasaurs. Heller and Carny succeed in their mission at the cost of the Bladefish being repelled by Master Kimora and Mighty Shouter. Raiden uses the Spell of Swift Regeneration which restores the horns of the Rumbling Terrasaurs as well as Mighty Shouter's tusks.

In Siege, a Rumbling Terrasaur is among the creatures that were exposed to The Choten's Evo-Serum Bomb.

A Rumbling Terrasaur missing it's horn 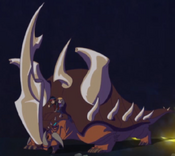 Evolved
Characters in the Kaijudo: Rise of the Duel Masters Series
Main Characters