The Monarchs are the rulers of the five creature civilizations.

As such, they are considered to be the largest and most powerful creatures in their respective civilizations.

Each Monarch was in possession of an artifact that could summon and control any creature from their respective civilizations; Infernus wielded the Sword of Fiery Cataclysm, Tritonus donned the Helm of Ultimate Technology, Almighty Colossus held the Shield of Unity, Kalima wore the Cloak of Dark Illusion, and Eternal Haven possessed the Heart of Light.

When the great war erupted between humans and Kaiju that threatened to destroy the entire world, the Monarchs banded together with five human wizards to end the conflict. The Creature Monarchs willingly sacrificed their mana energy so that the original Kaijudo Duel Masters might create the mystical Veil that has ever since separated the human and Kaiju worlds. Drained of almost all their energy, the five Monarchs fell into a deep slumber.

It appears the plan was originally to allow the Monarchs to recover their strength and awaken before sending them across the Veil so they might rule their civilizations again, but at some point, the Order of the Kaijudo Duel Masters betrayed the Monarchs' trust, periodically siphoning off their mana, keeping them in hibernation for millennia.

In The Rising Pt. 1, The Choten succeeds in his plot to use the five artifacts which he had stolen from the five civilizations to awaken the Creature Monarchs and summons them to him. He first summons Tritonus.

In The Rising Pt. 2, The Choten summons Infernus, but is tricked into losing the Sword of Fiery Cataclysm. Ray returns the Sword to Infernus who agrees to help them stop The Choten. The rest of the Creature Monarchs arrive and The Choten commands Almighty Colossus, Eternal Haven, and Queen Kalima to collapse the Veil. Gabe and Alakshmi sabotage The Chotens machinery, subjecting him to an energy surge that causes him to lose the Shield, Cloak and Heart. With help from Sasha, Channeler of Light, the Duel Masters used a Veil Creation spell to send the Creature Monarchs and the creatures that came through the damaged veil back to the Creature Realm.

With the Helm of Ultimate Technology still in his possession, The Choten uses his control over Tritonus to incite war throughout the Creature Realm.

After the Darkness Civilization attempted to establish a military foothold in the Human world, Allie returned the Cloak of Dark Illusion to Queen Kalima as proof of humanities good intentions, convincing her to stop the invasion.

After a devastating attack by the Water Civilization that left Fire and Nature flooded and in ruin, the Duel Master returned the Shield of Unity to Almighty Colossus so he could rally the Nature tribes.

At an unknown point and under unknown circumstances, the Heart of Light was returned to Eternal Haven.

In Clash of The Monarchs, the Duel Masters persuade the four free Monarchs to call for a summit in the Null Zone in hopes of exposing the Choten's manipulation of Tritonus. As part of the summit, each Monarch must give up their artifact, to show good faith and to make sure no one can pull a surprise attack. A battle subsequently ensued in which the Choten's forces and the Duel Masters attempted to claim control of the artifacts and with them, control of the Monarchs themselves. The Choten's people were able to get the Sword and Heart, but the Duel Masters got the Cloak and Shield. Infernus dueled Almighty Colossus while Kalima dueled Tritonus and Eternal Haven. Due to the mana-draining properties of the Null Zone and their exertion in combat, all five Monarchs fell comatose, though Master Kimora was confident that their mana production would sustain them indefinitely prevent them from perishing like lesser creatures would in the Null Zone.

It is unknown what happened to the Monarch's after The Choten dropped his mass evolution bomb on the Null Zone. 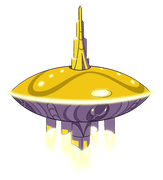 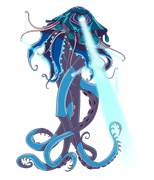 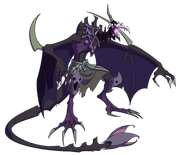 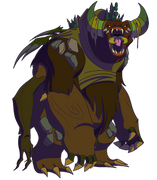 The creature Monarchs with the deceased Duel Masters.

Race
Races in the Light Civilization

Races in the Water Civilization

Races in the Darkness Civilization

Races in the Fire Civilization

Races in the Nature Civilization

Races shared between the Civilizations.