Mighty Shouter is a creature in the Kaijudo: Rise of the Duel Masters series.

Kimora's primary creature is Mighty Shouter, a massive veteran of many great wars among the five Civilizations. It has enormous strength and a deafening trumpet blast of a voice, which is handy for overpowering enemies. Though simpleminded, Mighty Shouter is fiercely loyal. Good thing it's on the Duel Masters' side. Mighty Shouter resembles a green humanoid elephant.

As a veteran of the many wars among the Creature civilizations, Mighty Shouter knows when to walk softly, when to trumpet loudly, and when to hit things with a giant tree trunk. Shouter's sonic blast and great strength overpower most of its foes. When paired with Master Kimora, Shouter literally becomes a force of nature. Mighty Shouter is fiercely loyal to Kimora, and the pair work well together as a team.

Mighty Shouter makes his first appearance during the Masters' battle with Flametropus, his massive size and strength allowing him to deal more damage to the huge rock monster than most of his comrades. Still, even he was eventually overwhelmed, leaving the battle to be won by Ray and Tatsurion.

In the Kaijudo Realm, Shouter is the protector of the Bronze-Arm Tribe, and is considered something of a hero. However, as most creatures don't believe in humans, his stories of his battles alongside Kimora were written off as an onset of madness and he was forced to live far from his tribe-mates. One day, Shouter was captured by the Choten and forcibly drained of his mana energy. Eventually, he was drained so far, he returned to the Kaijudo Realm. He was so weakened, he was unable to answer Kimora's calls to battle, leading his partner and the kids to come to the Nature Civilization to see what was wrong. When they were captured by the Bronze Arm Tribe, Shouter came to their rescue, revealing his ability to speak English. He explained that he never spoke to Kimora because, seeing how the other Masters treated their monsters, he knew Kimora would never listen to him, anyway. Revealing the situation of his life, Kimora realized he'd never thought what summoning Shouter from his home and tribe might do to his life in the Creature World, and promised to find a new creature to fight with until Shouter was fully recovered.

When the heroes found themselves in the Choten's base, Ray summoned Shouter to help in battle and destroy the machine the villain used to kidnap creatures from their realm. Even though Shouter was eventually overwhelmed, he and Ray were able to use his loss of mana to escape the Choten's base. Back home in the Creature Realm, Shouter and Kimora renewed their bond of fellowship, with Shouter promising to help his partner defeat the Choten once and for all as he is named shaman of the Bronze Arm Tribe.

In Forest for the Trees is is revealed that Mighty Shouter lost half his tusks when he was attacked by Bladefish. Mighty Shouter's tusks are later restored when Raiden used the Spell of Swift Regeneration to restore the horns of the Rumbling Terrasaurs. 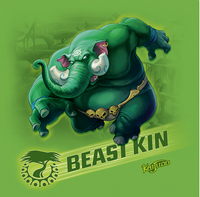 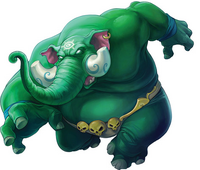