Meteor Dragon is a creature in the Kaijudo: Rise of the Duel Masters series.

Meteor Dragon was the Creature partner of Master Tiera before it "betrayed" her when Tiera demanded Master Nigel Brightmore to evolve it in the fire realm and it was too much for her to control. She summoned a Blaze Belcher for her to be banished with.

In Siege, Master Tiera used Meteor Dragon to fight Master Chavez and Gilaflame the Assaulter during The Choten's raid on the Duel Master Temple. 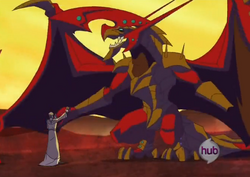