Janet Pierce-Okamoto is a character in the Kaijudo: Rise of the Duel Masters series.

She lives in San Campion with her father in-law and son.

In episode 24, Janet reveals to Raiden that his father was a Duel Master who taught her how to duel. During a fight in episode 24, Janet puts on her gauntlet to summon a creature, but is unable to do so, because The Choten activated a summoning inhibiter.

In episode 25, Janet relates her past to the Duel Masters council. Fifteen years before the series started, Janet was pregnant with Ray. She assumed her husband, Ken, was an ordinary civilian who told her he worked on a cargo ship. At some point in time, The Choten and his minions laid siege to their residence. In order to escape, Ken takes Janet to the Nature Civilization. However, they were unable to return to Earth immediately, because Ken's gauntlet was damaged when The Choten attacked.  To protect themselves better in the kaiju realm, Ken creates a makeshift guantlet from materials found in the Nature Civilization and teaches Janet how to duel. Raiden is eventually born in the Nature Civilization, and the family lives a simple life for some time.

Ken eventually was able to make a new gauntlet and opened a portal back to Earth, but at that precise moment, The Choten found them and attacked. Janet and Raiden went through the portal first, but Ken apologized to his wife and then sealed the portal to prevent The Choten from following. 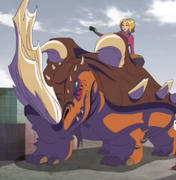