This page details the basic how-to, turn-by-turn explanation of the game, as well as details on how to use the different types of cards.

Both players do these things to set up for a game: 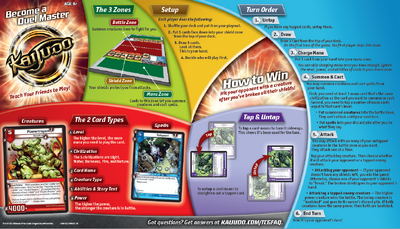 How to Play guide (click to see full sized image)

You win the game when you attack your opponent with a creature that isn't blocked when he or she has no shields left.

You can also win the game when your opponent has no cards left in his or her deck or they would draw their last card.

Only the person who plays first skips drawing a card on his first turn. Drawing a card means taking it from the top of your deck and putting it into your hand. As soon as you draw the last card of your deck, you lose.

Charge a card into your mana zone

You can play as many creatures and spells as your mana zone can afford during this step. You can play these cards in any order.

Attack with your creatures

You cannot summon creatures or cast spells after one of your creatures attacks.

Tell your opponent that you're done with your turn. Now it's your opponent's turn! Continue taking turns until one of you wins the game.

How to cast a spell

Choose a spell from your hand. The level for a spell is in the upper left corner. If you can't pay for the cards level, you can't cast the spell.

How to summon a creature

Choose a creature from your hand. The level for a creature is in the upper left corner. If you can't pay for the cards level, you can't summon the creature.

When you want one of your creatures to attack, choose which creature you want to attack with, tap it, and choose what it's attacking. Then do any effects that happen because that creature is attacking. After that, your opponent can choose blockers.

Only creatures with the "blocker" ability can get in the way to stop creatures from attacking what the attacking player wants them to attack.

You can use one of your "blocker" creatures to stop any attack. When your creature blocks, you have to tap it, so it can block only if it's untapped.

The creature with the higher power wins the battle. The other creature's owner puts it into his discard pile. If the creatures have the same power, then both creatures go to their owners' discard piles.

What happens first can sometimes matter during an attack. The following rules talk about the order in which things happen.

When you tap your creature to attack your opponent, do any effects that say they happen "when this creature attacks." Then, if your opponent doesn't block, follow any other instructions on your creature that apply. Then break shields (or win if no shields are left).

(These links have become deprecated.)

Latest tournament and rule documents can be found here.