Guardian Akhal-Teek is a creature in the Kaijudo: Rise of the Duel Masters series.

It resembles a metallic Pegasus with two horns.

It first appeared in The San Campion Hexagon where Ken Okamoto summons it to help fight The Choten and Squillace Scourge. After a fierce fight, Guardian Akhal-Teek was defeated and Ray had to do the Spell of Banishment on it to prevent Ken from falling into the ocean. 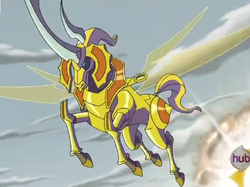 Akhal-Teek in The San Campion Hexagon
Characters in the Kaijudo: Rise of the Duel Masters Series
Main Characters