“Prepare yourselves, we have a long journey ahead of us.”—Slyth
“To Megaria's monster mash palace.”—Allie
“Actually, it's a creature; a living palace named Gigargon.”—Master Jaha

Gigargon is a creature in the Kaijudo: Rise of the Duel Masters series.

Chimeras are creatures constructed from extra parts of whatever is lying around. If a Dark Lord has big enough spare parts—and enough mana—he or she can make a Gigargon, a creature that is also a mobile lair. After all, it helps if your fortress can win duels all by itself.

It first appeared in the episode Heart of Darkness: Part 1. 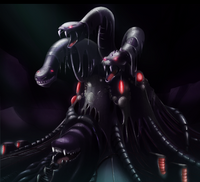