Gabriel "Gabe" Wallace, is a protagonist in the Kaijudo: Rise of the Duel Masters series.

He is friends with Allie and Ray.

Gabe is more direct than most people, but he’s honest and true. Ray’s friendship will start to change him – or at least make him want to change. He sticks close to Ray hoping that his easygoing nature will rub off on him. Becoming a duelist will prove to be a catalytic experience for Gabe, which will force him out of his self-protective shell and make him relate to creatures and people in a brand new way. Gabe's favorite creature is Gargle, Reef Prince of the Water Civilization. They take technology and logic to new heights each time they enter into battle together! He’s a very smart kid and a master strategist. He’s also overly formal, obsessively neat, and not a very coordinated sort of a human target.

The first time Gabriel "Gabe" Wallace met Ray, he beat him in a strategy gamers' tournament. Gabe loves math and science, and is both super logical and sometimes a little blunt. He gets picked on a lot -- and the chaos of his family life makes things even tougher for him. Luckily, Gabe's found a real friend in Ray ... and a true challenge in learning The Way of the Creature.

As a self-proclaimed nerd, Gabe doesn’t have many friends. His heroes are Mr. Spock and Stephen Hawking (he even likes the computer voice). Gabriel became the temporary Light Master of the Light Civilization due to his relationship with Sasha. 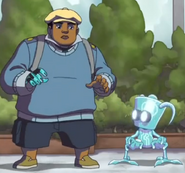 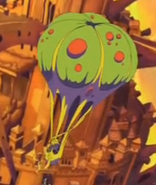 Ray, Allie and Gabe
Characters in the Kaijudo: Rise of the Duel Masters Series
Main Characters