Finbarr's Dreadnought is a creature in the Kaijudo: Rise of the Duel Masters series.

In Fallout, Nigel Brightmore and the Choten's Minions used an evolved version of Finbarr's Dreadnought to siphon water from the San Campion reservoir and flood the Nature Civilization. 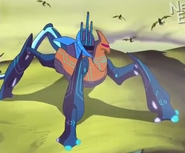 An evolved version of Finbarr's Dreadnought.
Characters in the Kaijudo: Rise of the Duel Masters Series
Main Characters