The Evolution Serum is a special serum manufactured by The Choten to permanently evolve a creature. 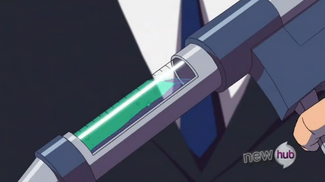 In Om Nom Nom, The Choten used the serum to evolve a Blaze Belcher, causing it to multiply every time it burped. Eventually, when all the Blaze Belchers were trapped by Ray, Allie, and Gabe in a glass cage, the original Blaze Belcher ate all of the other Blaze Belchers and was given the nickname "Om Nom Nom" by Gargle.

In The Rising, Part 1, The Choten and Aqua Seneschal used the Evolution Serum to evolve {{c|}Tatsurion the Unchained|c} and Humonculon the Blaster, the latter's evolution binding it to Saguru.

In Caught in The Spotlight, Nigel reluctantly used the Evolution Serum to evolve Ra-Vu, Seeker of Lightning in order to show Alexander Carnahan that the serum works.

In Gargle, Gargle, Toil and Trouble, after a brief fight with Feral Sabertooth at Alexander Carnahan's chemical factory, Feral Sabertooth falls into a vat of the Evolution Serum and evolves into a four-armed version of itself.

In Darkness on the Edge of Town, a truck full of the Evolution Serum vanishes into the Darkness Civilization.

Sometime between Forest for the Trees and Siege, The Choten somehow gets the truck out of the Darkness Civilization.

In Bargain, it is revealed that there is an antidote to the serum. However, it doesn't work on human/creature hybrids.

In Siege, the Evolution Serum is used to fill the Weapon of Mass Evolution and is dropped on the Null Zone, evolving a multitude of creatures.

In The Evolution Will Not Be Televised, the Mystics grant Raiden Pierce-Okamoto the ability to use the Spell of Radiant Purification to undo the Weapon of Mass Evolution's effects. 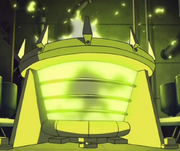 A creature evolving from the serum

Add a photo to this gallery
Retrieved from "https://kaijudo.fandom.com/wiki/Evolution_Serum?oldid=55464"
Community content is available under CC-BY-SA unless otherwise noted.