Creatures are the most important cards in the Trading Card Game.

Creatures can have a level, civilization, race, abilities and power displayed on their cards.

Creatures are summoned into the battle zone by paying for their level by tapping cards in your mana zone. They can attack your opponents creatures, shields or the opponent himself. Breaking all of your opponents shields and then attacking the opponent is how you win the game.

To attack with a creature, tap it, then select its attack target. You can only attack tapped creatures or an opponent's shield, unless effects state otherwise. Once your opponent has no shields left, you need to make one more unblocked attack to win the game.

Each creature has its own power, and it dictates whether it will be able to win the battle or not, if it battles another creature. It also has a race, which is vital to certain effects, and important for summoning evolution creatures.

There is no limit to the number of creatures you can have in the battle zone. 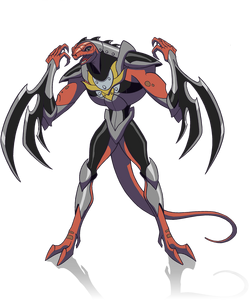 Gilaflame the Assaulter as he appears in the TV series 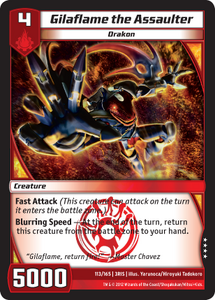 How to Play
Card Types

Retrieved from "https://kaijudo.fandom.com/wiki/Creature?oldid=53268"
Community content is available under CC-BY-SA unless otherwise noted.