There are five Civilizations that exist in the Trading Card Game and the Kaijudo: Rise of the Duel Masters television series.

They are represented on the cards by their civilization symbols and the color of the cards:

Each card in the game has at least one civilization with the civilizations being very important when summoning creatures or casting spells.

Multi-civilization cards display a mixture of each of their colors on the card.

The Light civilization rises above the other civilizations, literally; they live in majestic, floating cities in the sky that operate with clock-like precision. For Light civilization creatures, intellectual power reigns supreme, and they have harnessed their superior intelligence to create elegant and advanced technologies to help them in all aspects of their lives. In fact, Light creatures' polished metal bodies are mechanical constructs designed to hold their souls, which are made of light. Due to their nature, they are able to use light in all its forms (waves, particles, beams, etc.), whether for defense or offense.

Area of the Light Civilization

The Water Civilization is located in the depths of any sufficiently large body of water, be it a pond, mighty river, lake or ocean. The most centered and naturally peaceful civilization, they often do not start battles, but once roused into a storm, their relentless counterattacks can decimate their foes.

They’re streamlined and highly technological – nearly as much so as the Light Civilization. They exploit microchip technology as well as hydraulics. Because speaking is difficult underwater, many inhabitants use mental telepathy to communicate. And the Water denizens can utilize supersonic/electromagnetic waves.

Area of the Water Civilization

At home in deep subterranean cave systems and anywhere in the darkness, they are the ‘bump in the night’. They are the creepy crawlies, ever patient and always using the shadows to their advantage. Obscuring their maneuvers and strategy, the Darkness civilization tends to be sneaky and deceptive – choosing the right moment to pop out and scare / attack /greet their enemies.

The Darkness Civilization has a certain spooky, creepy side with its undead, demons and especially ‘the masks.’ Many creatures of Darkness always wear masks, which keeps others guessing about who or what is beneath. The ‘unpredictable’ side of darkness (and what may come out of it) is intriguing. On a deeper level, dark things are neither all bad nor all good – and darkness offers many lessons useful not only to dueling but to life.

The primary colors of the Darkness Civilization are PURPLE and BLACK. These can represent the sneakier aspects of this Civilization, such as plotting, planning, hoarding (as opposed to their toxic waste, poison and so on). The look is frequently “cobbled together,” stitched or otherwise misshapen. Armor and weaponry are always macabre, but cool!

Area of the Darkness Civilization

The Fire Civilization is shimmering deserts and rocky badlands, all surrounded by magma-belching volcanoes. In this blast-furnace land live creatures with explosive personalities and high-explosive weaponry. Fire creatures don’t do a lot of planning, and do less negotiating, making Fire the most warlike civilization.

Fire is driven by the need to act now and think later. Other civilizations see Fire as impulsive, angry, and out of control, but Fire knows that the key to winning is quickly acting on instinct.

Area of the Fire Civilization

The Nature civilization is the largest kingdom in the Creature realm, and it threatens to grow larger every day. This expansion causes continuing conflict with the other Civilizations, because the nature of Nature is growth in every direction. The civilization’s motto is simple: Survive at all costs. Nature civilization creatures are often tribal, with a tendency toward spiritual and shamanistic practices.

Not surprisingly, the Nature civilization tends to be more primitive than the others, relying more on brute strength and weaponry found in their surroundings (thorns, vines, shells, poisonous stingers, etc.).

Area of the Nature Civilization

The Null Zone is the massive border between all five civilizations. In this area, creature mana gets siphoned. Only Monarchs can enter without much ill effects. 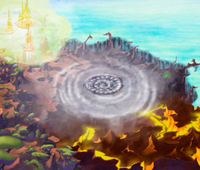 The Kaijudo Library, displaying tablets of the 5 civilizations.

A Civilization Color Wheel with names of characters from the T.V show and their (respective) civilizations.
How to Play
Card Types

Retrieved from "https://kaijudo.fandom.com/wiki/Civilization?oldid=56922"
Community content is available under CC-BY-SA unless otherwise noted.