Cards in the Kaijudo Trading Card Game are grouped into five different rarities: common, uncommon, rare, very rare, and super rare – and you will find familiar creatures from the Kaijudo: Rise of the Duel Masters series at each rarity.

Cards of higher rarities such as a Super often feature stronger effects and power than cards with a lesser rarity such as common, however, this is not always true. While a Super Rare card such as Earthstomp Giant might seem like a more powerful card, a Common card such as Aqua Seneschal is used more frequently in competitive play.

Cards in the Kaijudo Trading Card Game are grouped into five different rarities. The symbol for a card's rarity is marked in the border on the bottom right corner of the face-up side. The number of stars indicates the level of rarity – the more stars, the higher the rarity 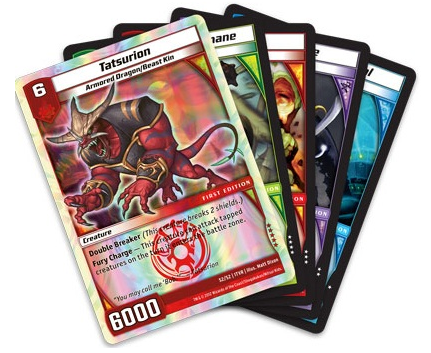