Bronze-Arm Sabertooth is a creature in the Kaijudo: Rise of the Duel Masters series.

It resembles a four-armed smilodon with a mane and long sharp claws. It is very tall and has a muscular build. In its pre-evolved form, it only had two arms.

While Bronze-Arm Tribe members are relatively small, Bronze-Arm Sabertooths are a different story. Not only do they have gigantic teeth, but huge claws as well! Come too close and they will rip you to shreds.

In Siege, a Feral Sabertooth is among the creatures that are exposed to The Choten's Evo-Serum Bomb. 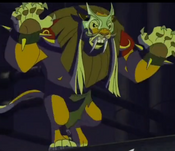