Booster Brawl is a set in the Trading Card Game.

In Booster Brawl, players play from a shared deck made out of 8 boosters and draft cards as they play against each other. 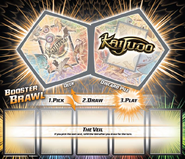