View source
watch 01:36
We're Getting Mutants in the MCU - The Loop
Do you like this video?
Play Sound

Bolshack Dragon is a creature in the Kaijudo: Rise of the Duel Masters series.

Armored Dragons form the core of the Fire Civilization's fighting forces. And among that core, Bolshack Dragon is the one who usually leads the massive numbers of fire troops against Fire's enemies.

He first appeared fighting against an Earthstomp Giant in the Nature Civilization in The Natural: Part 1. 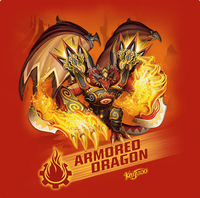