Bolgash Dragon is a creature in the Kaijudo: Rise of the Duel Masters series.

250 feet tall, heavily armored and with immensely large laser cannons affixed to each arm, Bolgash Dragon is not a creature you want to ever see on the horizon. If for some reason you have to fight one, good luck defending yourself from its piercing fire-it has been known to tear entire Light armadas apart with a single blast!

Bolgash Dragon was summoned by Lord Skycrusher using the Sword of Fiery Cataclysm in a battle against Tatsurion the Unchained, Ray and Allie. He was however defeated after Gabe arrived to the arena piloting Gasbag and dropping a black substance on his face, blinding him. 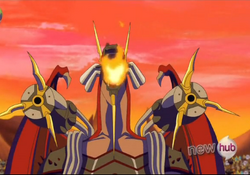