Blastforge City is a location in the Kaijudo: Rise of the Duel Masters series.

Among the rocky crags and magma fields of the Fire Civilization lies Blastforge. Unlike most of the cobbled-together Fire cities, Blastforge is a thriving metropolis that towers above them all. It's a city full of merchants and traders, especially slavetraders whom are very popular. Blastforge City also showcases gladiatorial battles in its arena where creatures fight to the DEATH!

Raiden Pierce-Okamoto and Gabriel Wallace had their first visit to Blastforge City in Into the Fire Pt. 1 when Drakons working for Lord Skycrusher kidnap Allison Underhill and Scaradorable of Gloom Hollow. Some of Tatsurion the Unchained's past had him as a prisoner of it's arena.

In The Rising Pt. 2, Infernus the Immolator was seen in Blastforge City as he announces that the Fire Civilization is going to war.

In Boiling Point, Raiden and Tatsurion were in Blastforge City when Infernus the Immolator pardons Tatsurion of his past crimes.

In Quest In Fire, Raiden, Gabriel, and Allison head to Blastforge City in order to get info on where they can find the Fire Mystic.

In Fallout, Blastforge City was destroyed by the Fire Civilization's war with the Water Civilization.

Referred to on cards 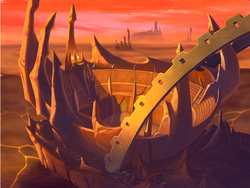 The arena where the gladiatorial battles take place.

A destroyed Blastforge City as seen in Fallout.
Retrieved from "https://kaijudo.fandom.com/wiki/Blastforge_City?oldid=55032"
Community content is available under CC-BY-SA unless otherwise noted.