"You've missed much while you were away, son. Almighty Colossus has returned." — Headstrong Wanderer

Almighty Colossus is a creature in the Kaijudo: Rise of the Duel Masters series.

Almighty Colossus, monarch of the Nature civilization lay in slumber for eons, his mana being siphoned off by the Kaijudo Duel Masters to sustain the Veil. After being woken by The Choten, Almighty Colossus returns to Nature to rule his civilization.

Thousands of years ago, Almighty Colossus was the ruler of the entire Nature Civilization and was the wielder of the Shield of Unity. When a war between humans and Kaiju that threatened to destroy the entire world erupted, Almighty Colossus, Infernus the Immolator, King Tritonus, Queen Kalima of the Infinite Dark, and Eternal Haven, Angelic Liege banded together with five human wizards to end the war.

The Creature Monarchs willingly sacrificed their mana energy so that the original Duel Masters might create the mystical veil that has ever since separated the human and Kaiju worlds. Drained of almost all their energy, the five Monarchs fell into a deep slumber, with the Nature Monarch being buried inside a mountain.

It appears the plan was originally to allow the Monarchs to recover their strength and awaken before sending them across the Veil so they might rule their peoples again, but at some point, the Order of the Kaijudo Duel Masters betrayed the Monarchs' trust, periodically siphoning off their mana, keeping them in hibernation for millennia.

Later in the next season, it is revealed that he can give large amounts of mana to his civilization just by walking on the land. 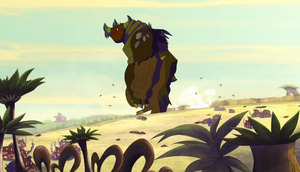 Almighty Colossus in the Nature realm 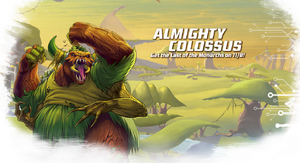 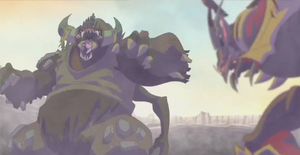 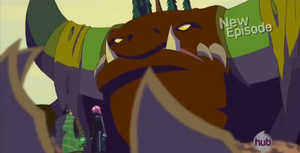 An up close shot
Characters in the Kaijudo: Rise of the Duel Masters Series
Main Characters